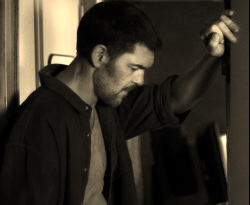 Born and bred in London, Jake has called the Bay Area home for the past fifteen years, and "Down the Road" will be his first appearance in Sacramento. Hitting the stage again after "blimey, decades", he's been a feature of the thriving SF indie film-scene, as both writer and actor.

Noted for roles as bad guys and anti-heroes in a dozen features over the past several years, he claims he's looking forward to what appears on the surface to be a more sympathetic role.


But as he also says:

"Nothing's simple, not with people. The saints among us have secrets, and somehow the worst sinners find redemption". 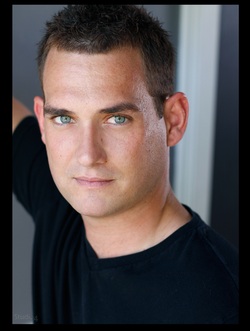 Acting is something Dustin is very passionate about and is consistently working to be better with each and every performance. Although he is no stranger to film he has started to explore and take his passion to the stage. After playing Simon Putnam in the production of An Act of the Imagination in early 2013 Dustin has discovered a new spark with his acting with no sign of slowing down. He is extremely excited to be playing the character of William Reach in the production of Down the Road and looks forward to reaching into the audience's minds, rattle them out of their comfort zones. 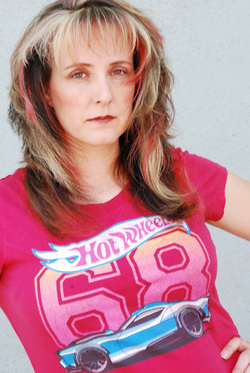 I am so pleased to be getting on stage for this production with the ever enthusiastic Kara Ow!  I have appeared on stage as everything from nuns, a teenager, drug addict, a woman devastated by the loss of her child, a bitter man hater, and finally a more comedic role as a rather stuck up, neglected housewife with too much money and time on her hands.  Working with The 68 Cent Crew Theatre Company, The Actor's Workshop of Sacramento, and now my own production company, its been a great ride on shows like Beggars in the House of Plenty, Catholic School Girls, Liar (directed by Kara Ow) and Moving Mountains.  It will be awesome to add Down the Road to that list.

I got my start with The 68 Cent Crew Company in LA about 8 years ago where I've not only acted, but directed, produced and had my own full length play performed.  I am pleased to be producing and acting in this production with the effervescent Kara Ow, the highly intelligent and sexy Jake Lyall, and our new exciting find, Dustin Miller.

This is the third...ya, third show I've done with Elise and EMH Productions (Liar, Dog Sees God:Confessions of a Teenage Blockhead). We always have such a blast!

After DSG I was in Richard Bay's The Raven and Other Images by Edgar Allen Poe. It was Poe with puppets! Awesome, right?!? I am also the founder of Uh, Yup Productions. Keep an eye open for Uh, Yup's next project, Eating While Crying: a Show About Food.

I'm thrilled to be bringing this latest production for the fall onto the stage at the Geery Theatre.  It starts out the series of shows for EMH's 2013/14 Season.  I'm beginning with something creepy and disturbing again, although not like My Fellow Creatures.  Lee Blessing has written a tension filled, fast paced one act play that reaches out to you ever so quietly, wrapping you up in the mind of a serial killer's confessions until you're trapped and there is no way out.  Its a great commentary on how we consume violence.  I had the opportunity to spend an hour on the phone with Lee, and what a delight it was to hear this great writer's thoughts on this show!

My first full out directing and producing came with My Fellow Creatures presented at the Wilkerson Theatre in Sacramento last fall, 2012.  It was an experience for sure and one I am grateful to have had.  It is where I got to work with 3 really talented guys who have now all been in a second of my shows:  Dan Fagan in Liar and then Sean Williams and Lonon Smith in Moving Mountains. I also produced and directed Dog Sees God:  Confessions of a Teenage Blockhead with the talented Eason Donner.  I'm excited to back working with Kara Ow as my director for this production and can't wait to see what creating this Live Audience experience for you all will be like!

James and Leslie Simmons are the dynamo team behind our trailer for this show.  THANK YOU!!!